It is often wondered if airplanes also have gears like other vehicles? I have always been interested in this issue, and I have consulted the relevant information and shared it with you:

In this article, aircraft gears will be thoroughly examined to understand their role in aircraft engines. To draw a roadmap, let's examine the type of gearbox we have.

Here, the terms "gear" and "gearbox" are used interchangeably because gears are an integral part of a gearbox.

I. Types Of Aircraft Gearboxes

An accessory gearbox is a gearbox within an aircraft engine that drives accessories that are critical to the operation of the engine or the aircraft on which it is installed. The accessory drive derives its power from a central shaft connecting the turbine and compressor stages of the aircraft engine.

The accessory drive gearbox provides shaft power to aircraft accessories (fuel control unit, starter/generator, lube oil pump, tachometer sensor driver and alternator). Meanwhile, the accessory gearbox and transfer gearbox are similar in that they are both driven by a high-pressure spool and can handle around 500 horsepower.

Why use a reducer?

The purpose of using a gearbox in an airplane cannot be overemphasized. Some of its functions are listed below:

To achieve the desired specific power (horsepower per pound of aircraft weight). This is the second most important characteristic of an aircraft engine after reliability.

Efficient operation is achieved by increasing the propeller speed. 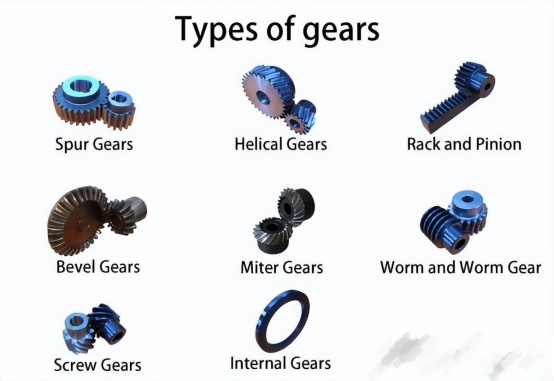 Each gear type has its advantages and disadvantages. Therefore, the choice of gear depends on what the gear designer wants to achieve. Offset helical and spur gear reduction drives have been used in piston engines with ratios less than 7:2.

Over the years, spur gears have shown their reliability through their widespread use in several popular aircraft engines operating for countless hours. In addition, many supercharged engine accessory drives have spur gears, especially in supercharger drive unit applications, with boost ratios as high as 12:1. These relatively small gear drives can carry 100s of horsepower to drive the blower and take several acceleration loads.

In addition to the widespread use of spur gears in piston engine applications, they are also used in the propeller reduction gear of many turboprop engines. However, the main problem with spur gears is energy density.

All these challenges faced by piston engines prompted Frank Whittle to propose a radical new design approach that ushered in the era of the jet engine.

IV. Gears In A Jet Engine

Since then, jet engines have evolved into turbofans, which have grown larger over the years to accommodate bigger and better fans. Most modern aircraft are powered by jet engines. Simply put, jet engines convert energy-rich liquid fuel into thrust. Turboshafts, turboprops, turbofans, ramjets, and scramjets are the types of jet engines we have today.

In 2016, Europe's largest aerospace group, Airbus, launched a new product called the A320neo with a geared turbofan engine. Geared turbofans use a planetary reduction gearbox, which increases efficiency and reduces weight. However, some energy is lost as heat in the gear mechanism.

Other types of gears may include:

Herringbone gears (similar to double helical gears, except they don't have the gap separating the two helical faces).

Next, we consider the gears as propellers.

The gears that act as propellers help ensure the most efficient power absorption to transfer power and rotational motion from the crankshaft to the other shaft. The gears help the aircraft generate thrust after partially overcoming its weight and drag on it with the help of its propellers.

A constant speed propeller (CSP) is a variable pitch propeller that maintains a constant rotational speed by automatically changing its pitch, regardless of airspeed or altitude or engine torque produced.

A constant speed propeller is able to draw in more air by rotating the portion of it along the longest axis of the blade to maintain the most efficient direction of airflow around it. This operation is more suitable for modern jet engines and high performance propeller driven aircraft.

In contrast, a fixed pitch propeller (FPP) has a fixed blade pitch. For smaller engines, FPP is a better choice because the extra weight in the CSP reduces load carrying capacity. Also, with fewer parts, FPPs are less expensive to maintain and lighter in weight.

Lubricant flow and weight reduction (without compromising durability) are critical when manufacturing gears. The key to producing precision gears is to minimize distortion in order to obtain complex, delicate gear shapes.

The manufacturing process requires the following:

The gear steel then undergoes a heat treatment process by absorbing carbon while the steel changes state in the presence of carbon monoxide. This process is called carburizing. The quenching process is then used for case hardening.

The gears are then machined to an accuracy of one micron.

Finally, the finishing accuracy of the gears is checked using special equipment to determine that there are no undiscovered defects in hidden areas. Gear meshing and cleanliness are also thoroughly checked during the inspection process prior to assembling the gearbox.

In recent years, the aviation industry has sought to achieve a 60-minute "LOL (Loss of Lubrication)" operation. This means that the aircraft should be able to continue flying after the gearbox loses lubrication, especially for commercial aircraft and aircraft performing special field missions. The key to achieving this duration (60 minutes) is efficient cooling.

Carburized steel is the material of choice for aircraft gears. This choice was made because gears in aircraft must perform their best at higher speeds, higher loads and higher surface temperatures than many other gears used in other vehicle engines.

In aviation, efforts have been made to reduce fuel consumption and carbon emissions. To achieve this, progress must be made in the optimization and efficiency of gears.

Gradually, we are getting closer to the advent of advanced geared turbofans and open rotary engines. When such inventions prevail, gears will remain at the heart of aircraft technology. In fact, without gears, there may be no next-generation engine!